Home Jain News Shravanabelagola ride is just a tunnel away A 600-metre-long tunnel, considered a technological feat, is set to be completed for the new but yet-to-open Nelamangala-Hassan railway line to become operational from this month – well in time to carry tourists and passengers to Shravanabelagola where Bahubali’s Mahamastabhisheka is scheduled to take place early next year.
The event, marking the anniversary of the grand consecration of Bahubali, is an important Jain festival held once every twelve years in Shravanabelagola which is en route while travelling from Nelamangala to Hassan.
The new railway line is expected to be in many ways memorable for passengers travelling to Shravanabelagola from Bengaluru during Bahubali’s Mahamastakabhisheka.
All eyes are now on the tunnel, which has already turned out to be a major attraction among those living in villages near the tunnel near Marur of Kudur hobli in Ramanagara district.

When the tunnel is ready, rail services will be operated on the new Bengaluru-Hassan railway line almost 21 years after it was sanctioned by the then Prime Minister HD Deve Gowda in 1996. A new train is also planned on this line, extending up to Mangaluru from Bengaluru.

About 150 labourers, including technicians, have been working on this tunnel for the past two years in day and night shifts. Only a few works are left on the tunnel, which has been carved out of stone under the surface.

The tunnel is being touted as a technological marvel because of the challenge it posed for the engineers.

They had to tackle physical hurdles like massive rocks and boulders, but had to refrain from blasting them for fear of causing damage to the landscape in the region.

Another challenge was to design the tunnel in such a manner that – given the topography – heavy rainfall did not lead to accumulation of water in the tunnel that could affect the rail services on the new railway line.

These challenges forced the engineers to restrict the length of the tunnel to 600 metres from the originally planned 900 metres.

Using state-of-the-art equipment, the engineers and workers bored through the rocks and actually carved out a tunnel within a span of two years.

The tunnel has been reinforced with cement and concrete from within.

The tunnel project is being carried out at a cost of Rs 40 crore by labourers from Uttar Pradesh, Bihar and Jharkhand. 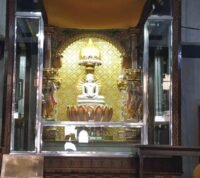